need help with your blog’s photos?
check out my stock photos
Your button text
18shares

Well, there’s no going back now!

I wish there would have been some way we could just add a little shim here, and a new board there, and call this porch good.

This whole curb appeal makeover process would have been a lot more fun if it was just adding pretty plants and rocking chairs.

But, when you’re talking about a house that is almost 100 years old, a full demo is in order. 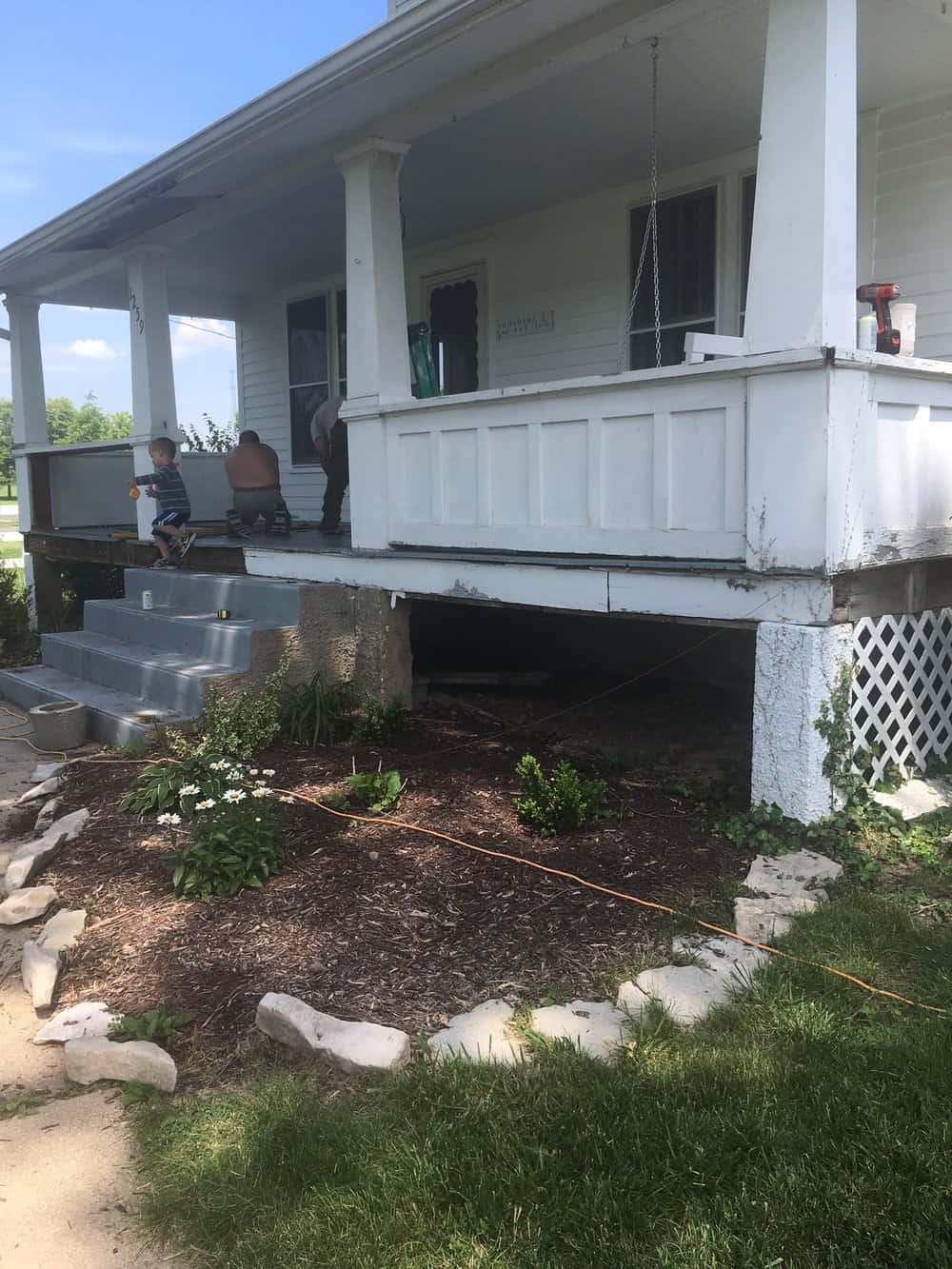 It would have been nice to keep the original pine tongue and groove flooring, but I really wanted stained wood, and there wouldn’t have been much left after sanding down all that paint.

Plus, there was quite a bit of damage in several areas. 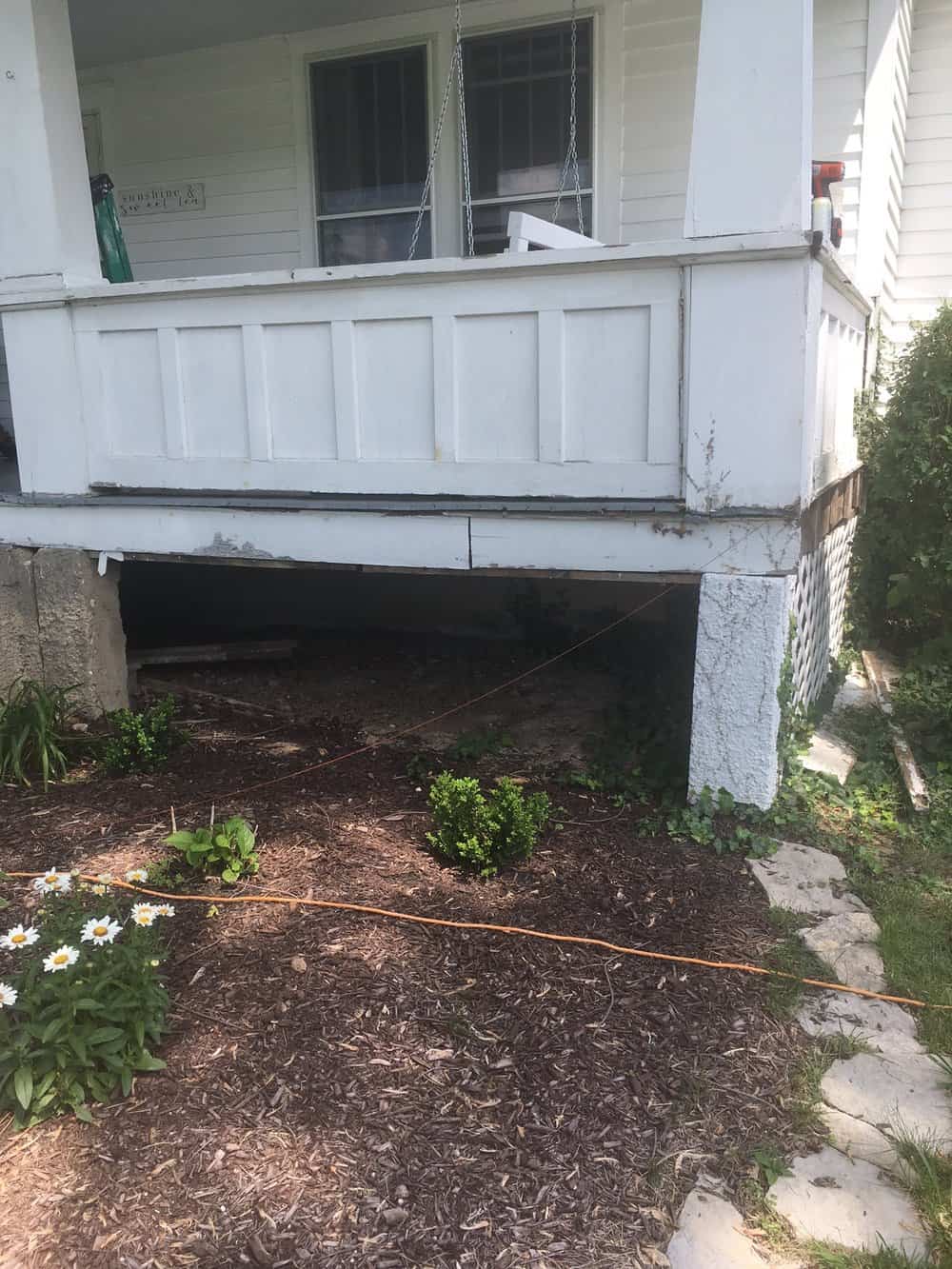 We basically ripped it all the way down to the porch frame. 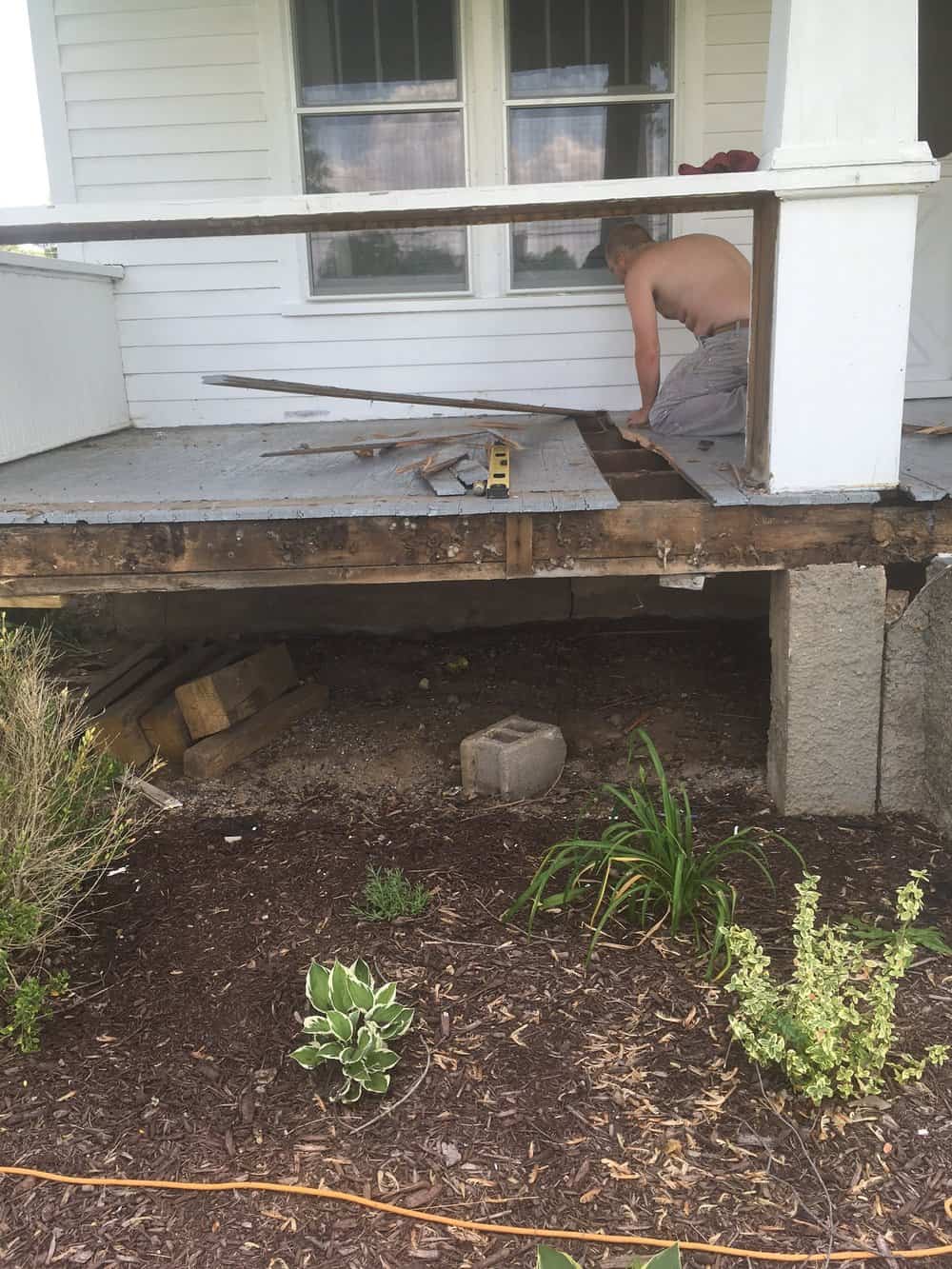 As you can see, we had lots of help… 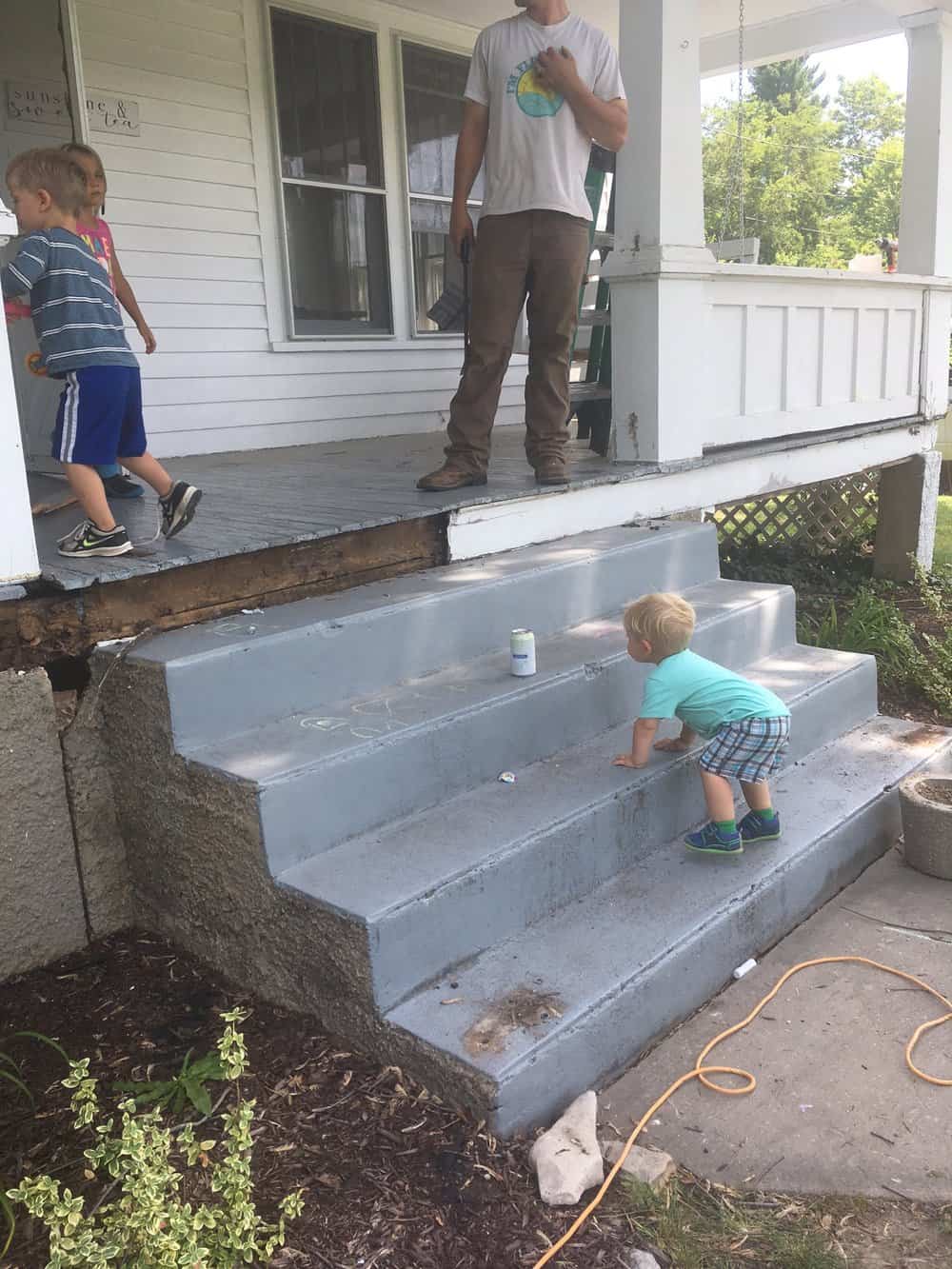 The kids and I only hung out for a few minutes, before I took them to do something else and let the men handle the job. 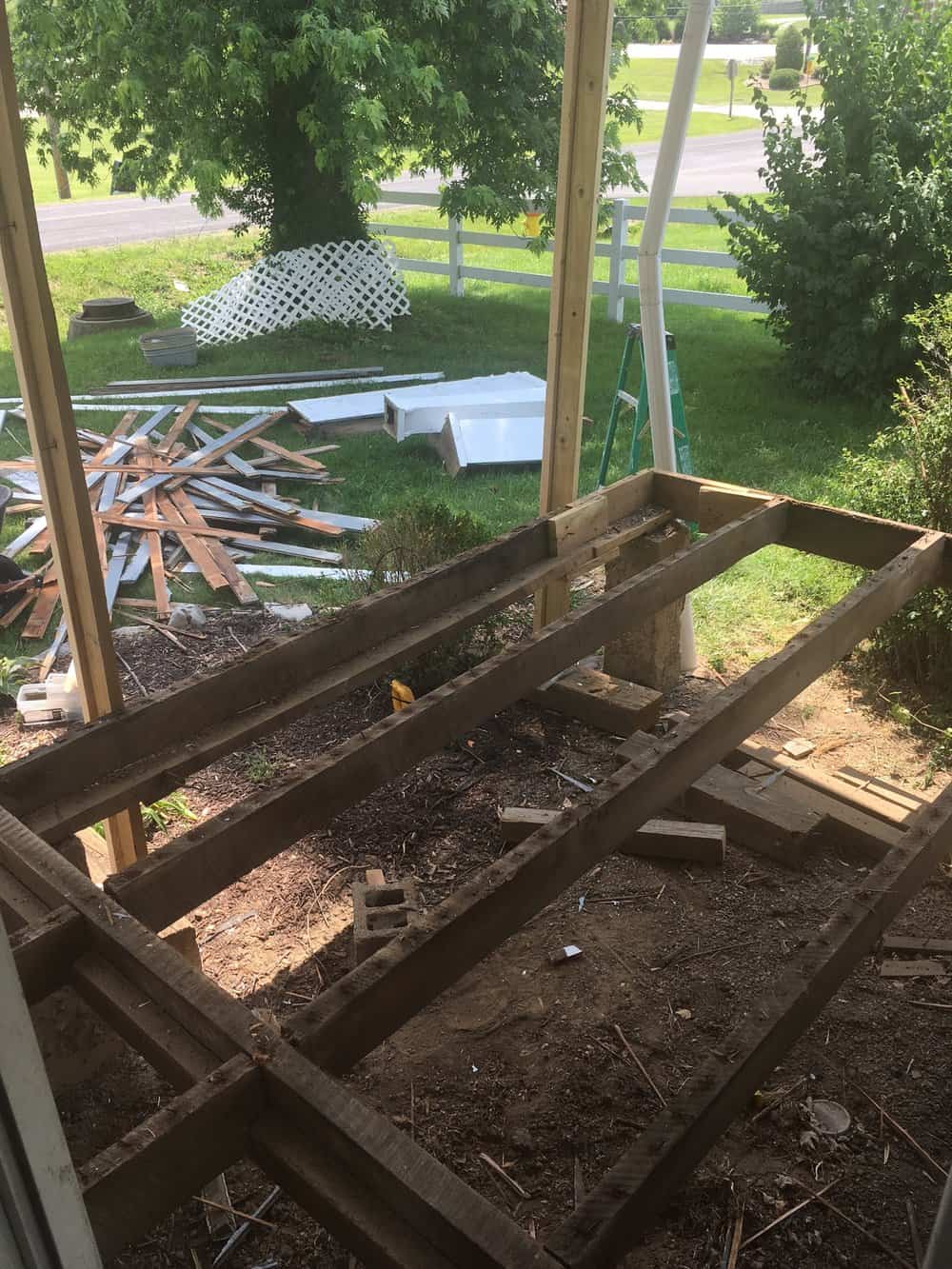 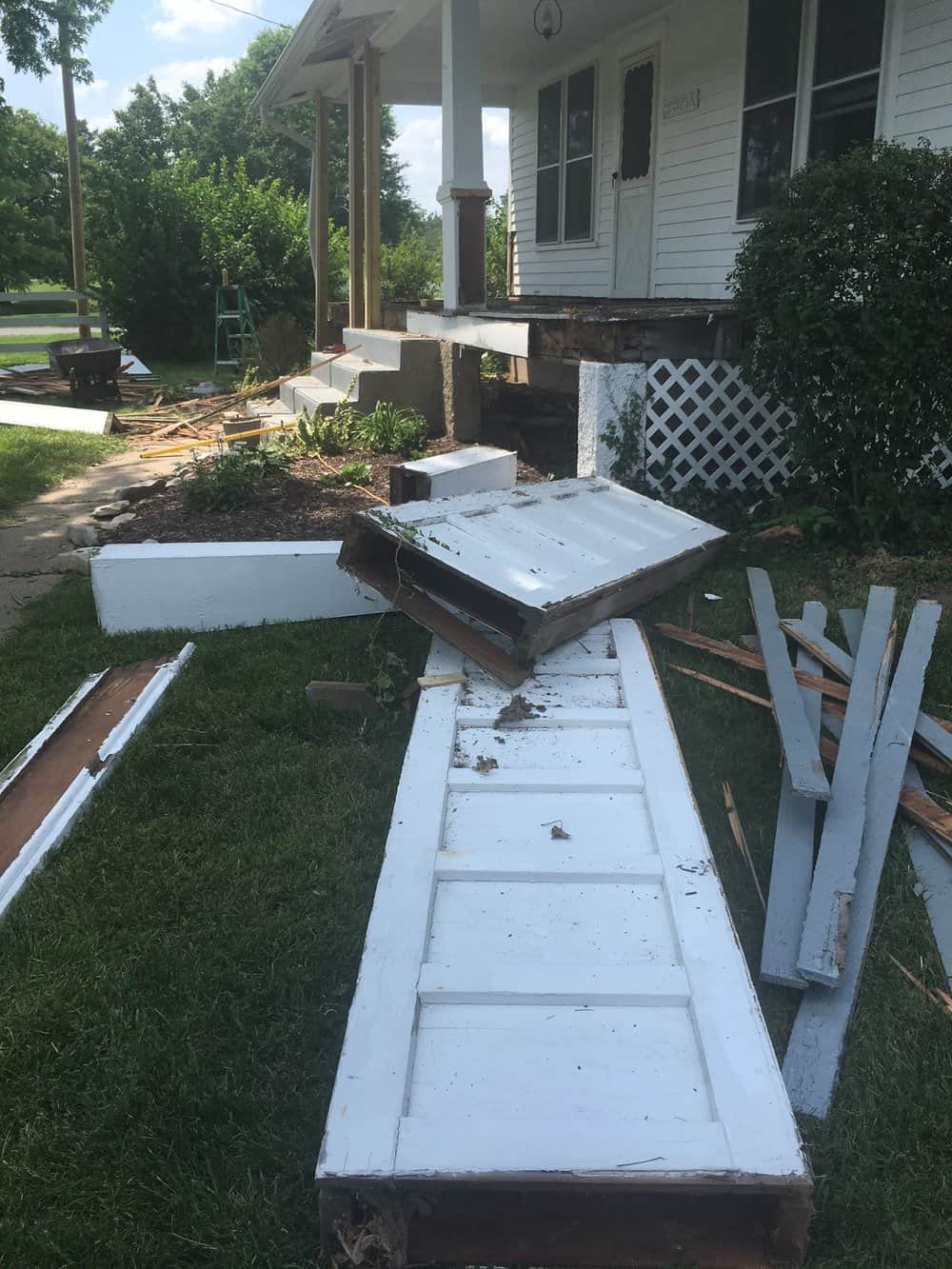 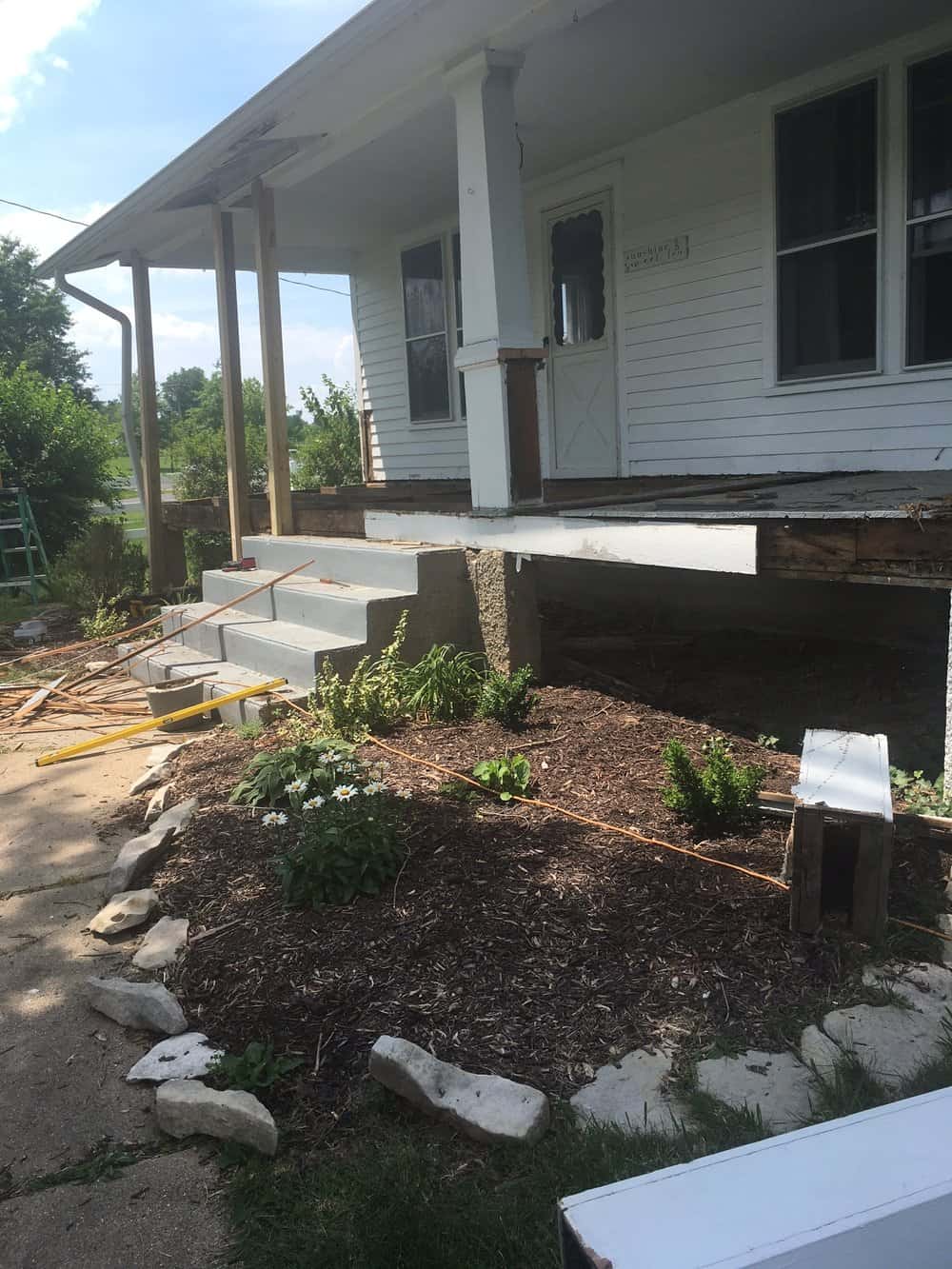 I want you to notice something in the photo below, that may not seem like a big deal… 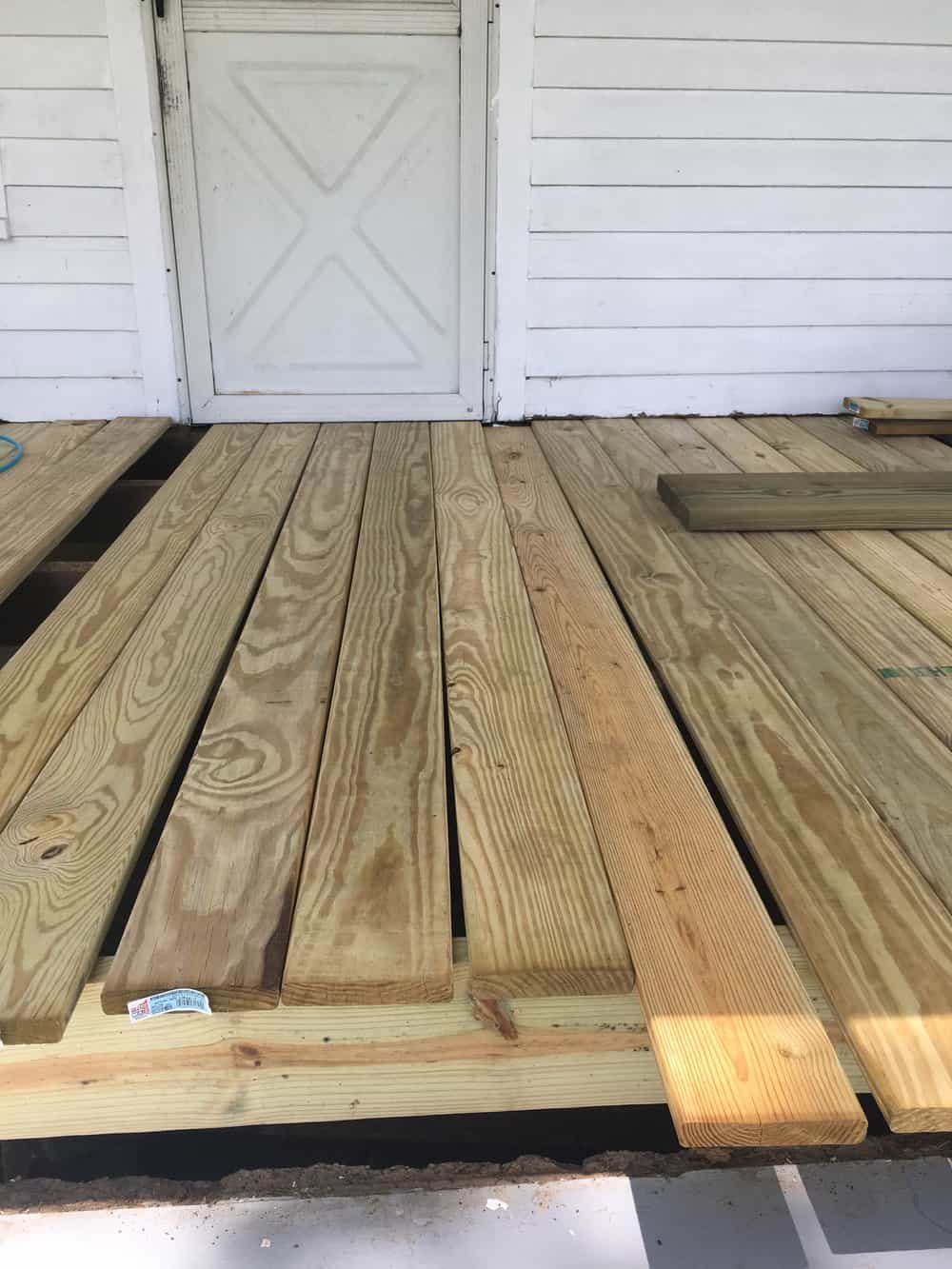 See the way the flooring is running from the door to the steps, perpendicular to the house, as opposed to parallel?

Would you believe I lost sleep over that floor placement?

Who cares right? Six of one, half a dozen of the other.

We were planning to run the flooring parallel to the house, because apparently that is the way it is done these days.

Well, the night before we would have to make that decision, I started noticing every old house porch had it running perpendicular to the house.

I did a little research, and it turns out that people used to build porches at a very slight angle, and run the boards from the door to the stairs, so water would run off more easily.

Also, some suggest that it is more inviting to run the boards in such a way that when people come up the stairs, the boards usher them straight into the home, so to speak.

I was afraid to change the original plan, but our house is old, and I try to honor that style as much as possible, in every design decision I make.

I don’t want anything to look too modern.

So, that pretty much settled it, the porch flooring will be running perpendicular, as it had before. 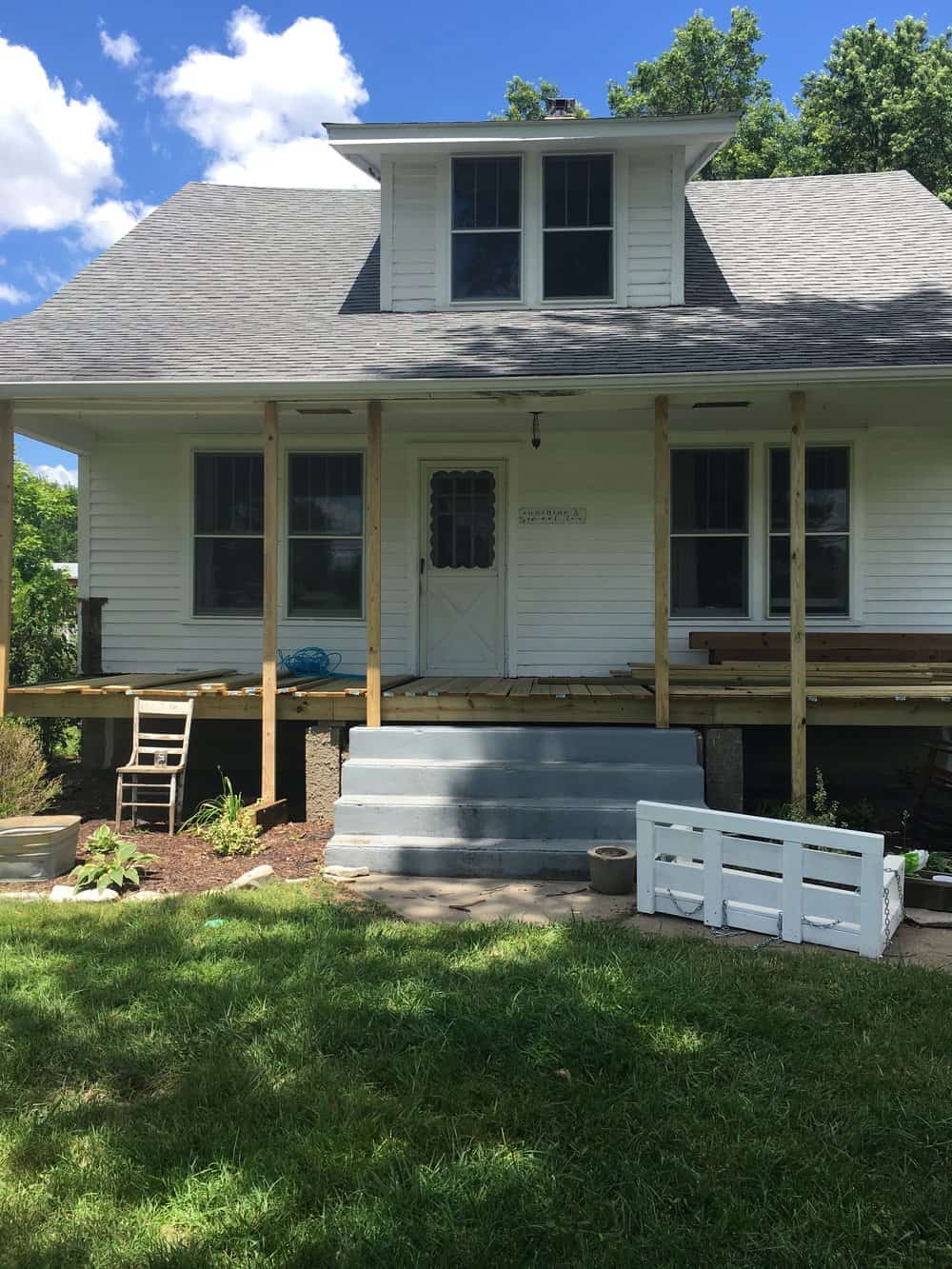 A few other things I have changed since my last post. (I warned you I was prone to making changes along the way.)

1. I am not going to do the pendant from my design board.

This is actually a sad one, because I wanted to do that pendant.

But, I didn’t realize that our ceiling is short, and anything other than a flush mount, or semi flush mount, would hang too low.

Instead, I am going to do this ceiling fan, or something very similar. 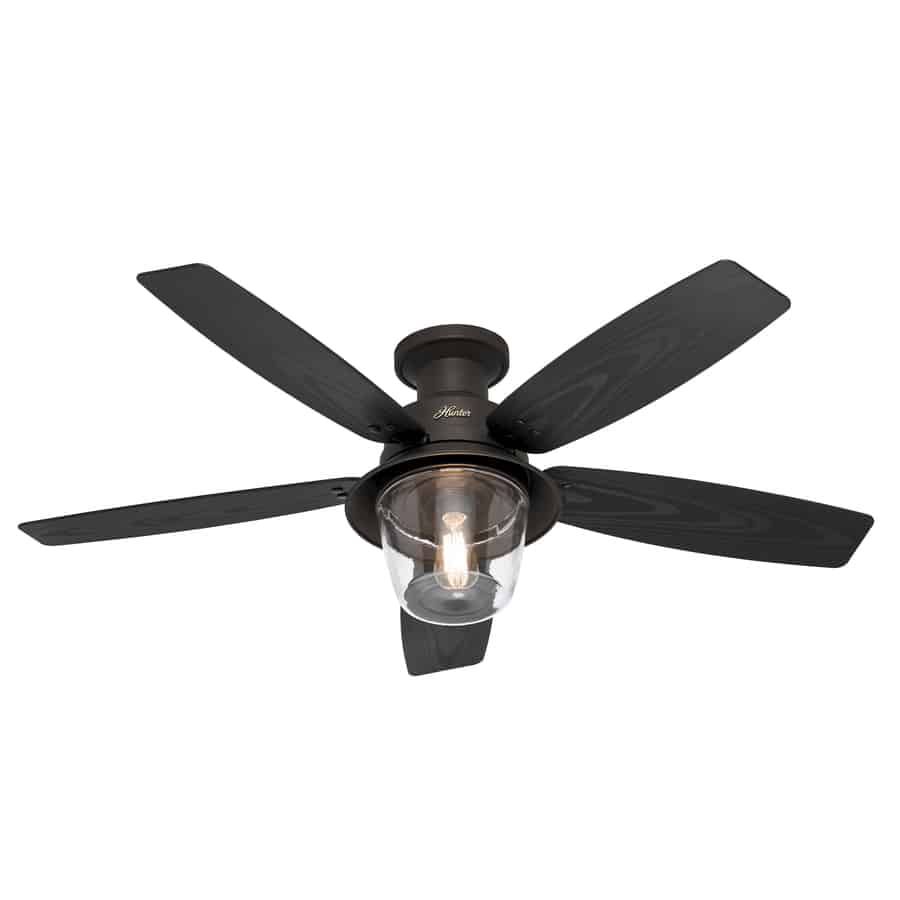 I am still going to use this Kichler Wall Light.

In fact, I already purchased it from my local Lowe’s!

In a perfect world, I would have two of them, and they would be placed on either side of the door.

However, since there is a huge beam that runs through the center of the room, behind the door, it would be literally impossible to get a light on the right side of the door.

This is the same reason that the door has to be off center from the stairs, and the middle of the house.

Quirks aside, I think it is going to be beautiful! 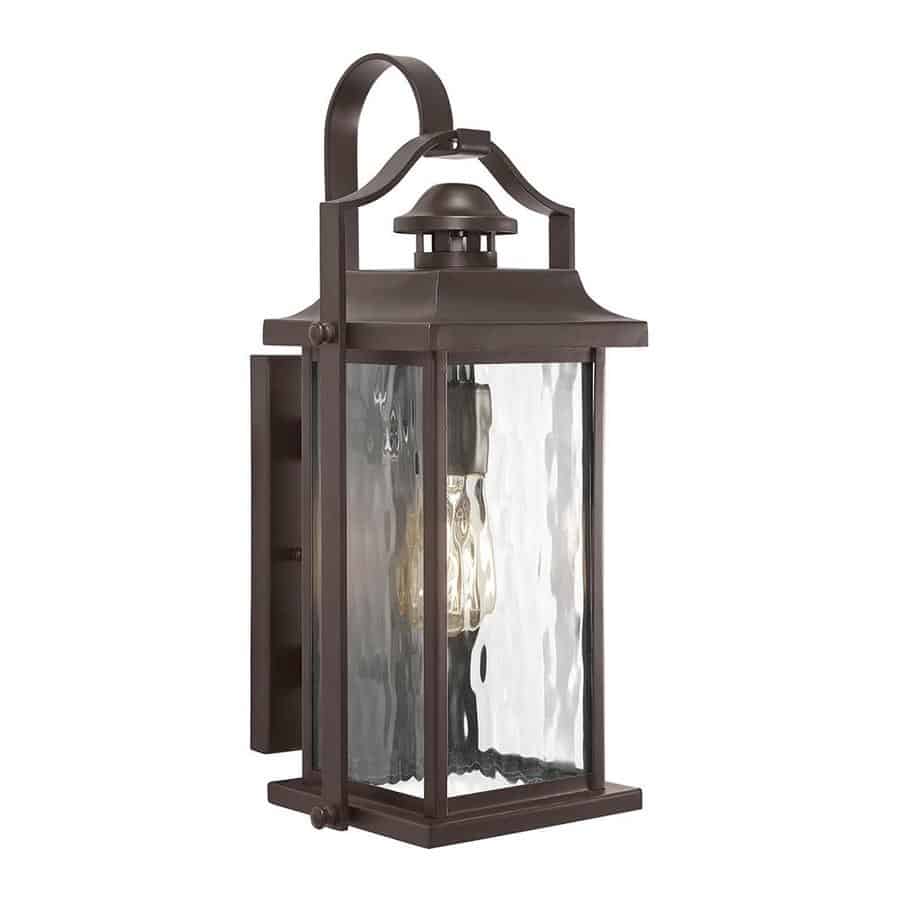 2. I am not going to be painting the door gray.

I bet my husband wishes I could say I would be slapping on a coat of paint and calling it done.

I knew it would be a tedious task, with all its grooves and details, but I thought restoring it to its wood condition, would bring it back to its original glory. 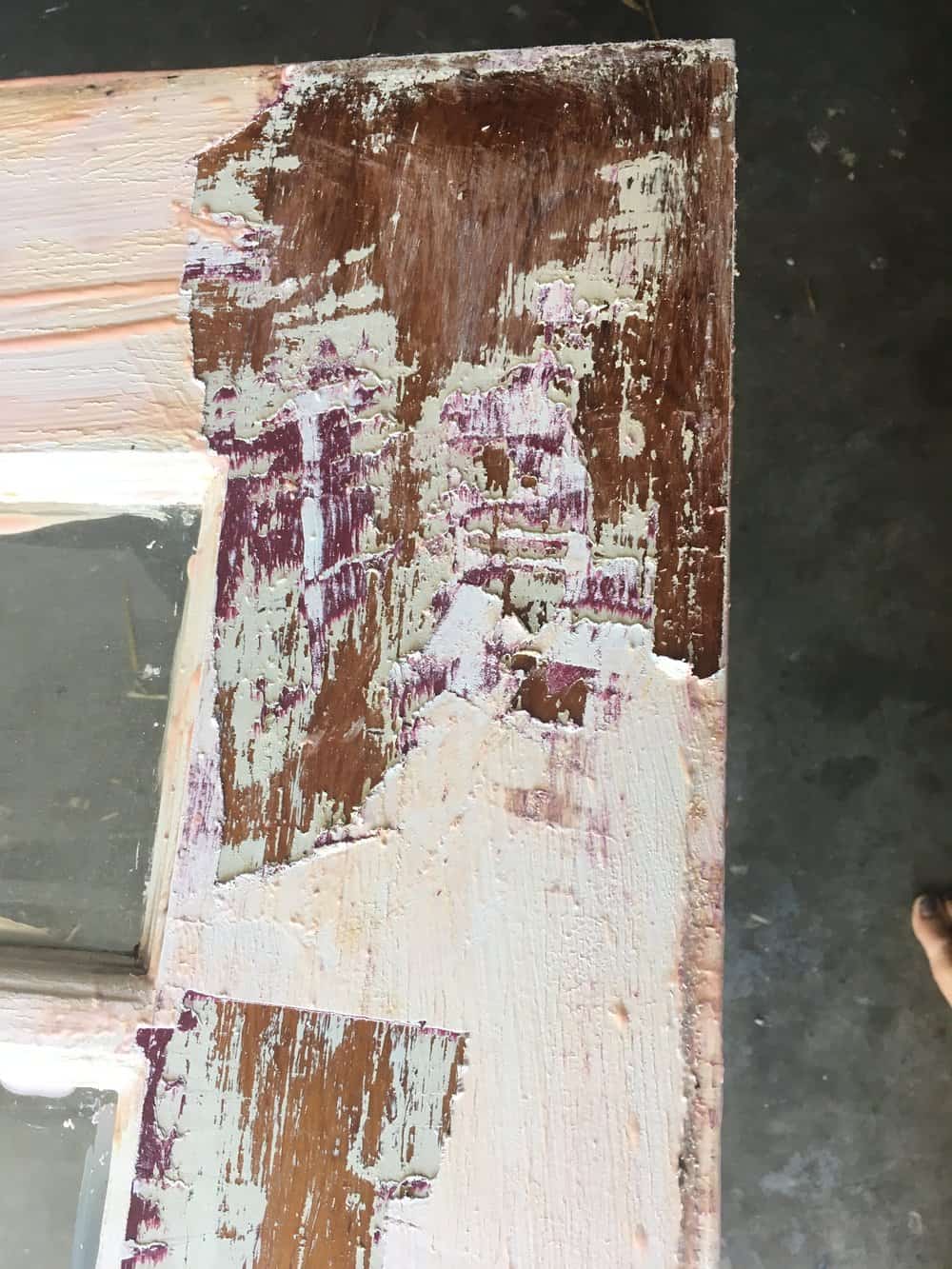 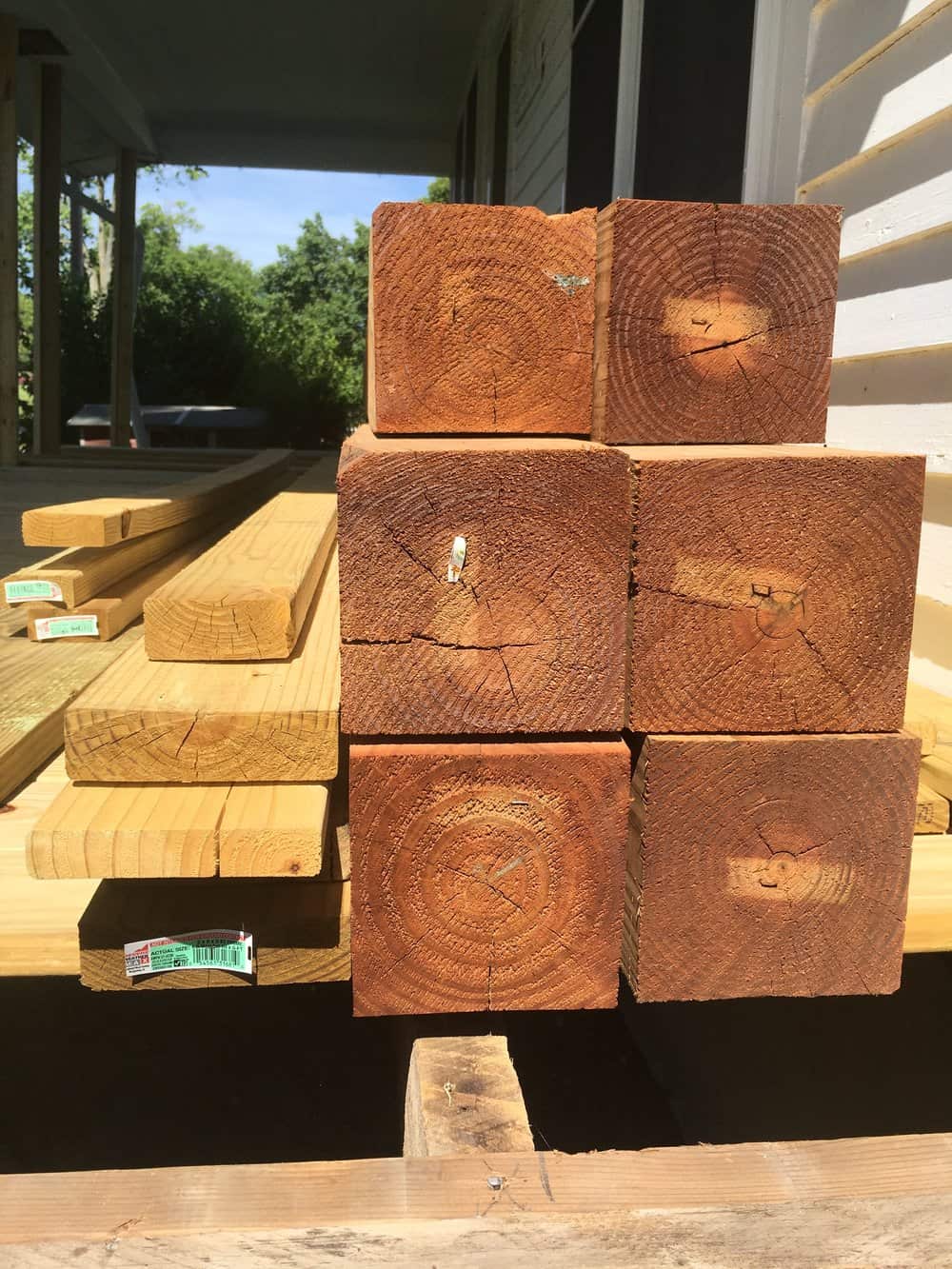 Those are the only changes, from the original plan, that I have made so far.

We did pick up several 6″ by 6″ wood beams, from Lowe’s, that we will be using for the beams.

Those will be the next thing installed, so that the temporary supports can be removed.

We will probably bulk them up with some type of crown molding.

Stay tuned for the next update in this saga.

The lady that lived here before us had eight hooks placed for hanging baskets, so expect to see a lot of ferns before this whole thing is over.

Thank you for stopping by, my friends! 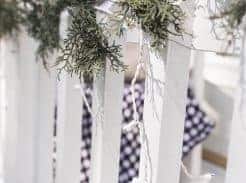 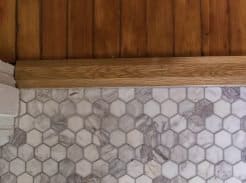 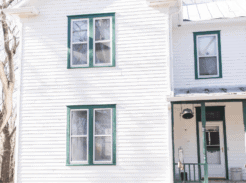