I mean really.  How could anything with so few steps and ingredients ever be considered revolutionary enough to be worthy of your time, dear reader?

Well, if your garden overfloweth with cucumbers and/or you want to start incorporating more fermented vegetables into your diet,  I think you will love this super simple recipe. Honestly, it has been a game changer for me with my last few cucumber harvests. 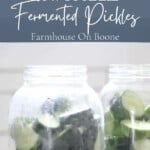 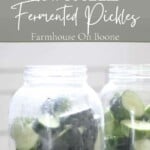 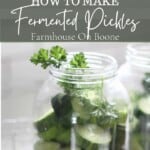 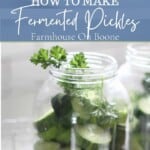 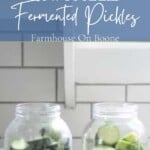 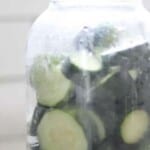 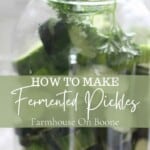 Homemade lacto-fermented pickles couldn’t be easier or more delicious. If you have time to slice them up and add them to salt water, you have time to make this recipe. This is seriously the simplest recipe ever and makes the best tasting, mildly sour, probiotic pickles.

I mean, really. How could anything with so few steps and ingredients ever be considered revolutionary enough to be worthy of your time, dear reader?

Well, if your garden overfloweth with cucumbers and/or you want to start incorporating more fermented vegetables into your diet,  I think you will love this super simple recipe.

Honestly, it has been a game changer for me with my last few cucumber harvests.

I remember last year, we ate more vinegar cucumbers, cucumber cream cheese sandwiches on sourdough, and plain old salted cucumbers than we could stand. Soon, I started making cucumber mint infused water by the gallon. But after all that, what else was a girl to do?

I mean, making pickles is hard, right? Surely no mom of seven has time for that!

Read more on the benefits of fermented vegetables HERE.

Spoiler alert: there are only three ingredients in this recipe: cucumbers, water, and salt.

You may be thinking that fermenting vegetables is intimidating and scary.

Isn’t there some recipe that doesn’t require fermenting?

Yes, there are. But, guess what? They are actually HARDER than this simple recipe, and nowhere near as beneficial for the gut!

Read more on the benefits of fermented vegetables HERE.

Before I started fermenting vegetables myself, I was overwhelmed by all the options that I saw all over Pinterest. “How to Ferment Vegetables with Whey”, “Best Starter for Homemade Fermented Vegetables”, “Why Lacto Fermentation is the Best”, “Best Air Locks for Home Fermenting”…… Whaaaaaa?

For a few years I decided that fermenting was too difficult. I was going to go crawl in a hole and avoid any article that resembled a fermenting tutorial.

Friends, I’ve been there. If you’re where I was, let me gently back you off that ledge and give a quick science lesson.

Salt is a special little mineral that prevents the growth of harmful bacteria.

When ferments are submerged in a salt brine, the good bacteria present on the fresh vegetables, namely Lactobacillus, can proliferate and grow uninhibited by bad bacteria. It also helps turn sugars into lactic acid.

So, my point is… all you need for vegetable fermentation is salt, veggies, and water. The process really couldn’t be any easier and less intimidating.

Read about how to make homemade sauerkraut here and homemade kimchi here.

Think of fermentation as growing your own probiotics.

Now, on to the easy fermented pickle recipe.

Watch How To Make Them:

A Few Notes And Tips:

Salt – Himalayan salt and sea salt are your best options. You don’t want to use iodized salt. Kosher salt may also be a good option, but it may contain anti-caking agents which you want to avoid.

Cucumbers – Pickling varieties of cucumbers are the best choice because they contain less water and tend to stay crunchier than other types. You can use other types of cucumbers, but they may not have a great texture after fermentation.

What Type Of Pickles Should Be Used For Fermenting:

I like to use Pink Himalayan Salt. You could use sea salt or Celtic salt, but don’t use iodized table salt.

Salt creates an environment that prevents bad bacteria from growing and allows the good bacteria, Lactobacillus, to thrive. It also helps keep the vegetables crunchy and slows down the fermentation process which helps add a lot of flavor.

Tools you may need:

Half gallon jar. Quart jar will also work, I just like to make big batches at a time.

How To Make Lacto-Fermented Pickles:

Add four tablespoons of salt to a half gallon size mason jar.

Next, bring a couple cups of filtered water to a simmer. This is going to be used to dissolve the salt.

Add the hot water to the salt and stir to combine. Fill the jar the rest of the way with filtered water and set aside to cool.

Add sliced cucumbers to another half gallon mason jar. I like using small, firm pickling cucumbers.

I like to slice them in approximately half-inch rounds. If they are too thin, they can get soggy, and who likes soggy pickles?

Now, this is the part where you could get creative and add parsley, dill, cloves of garlic, or whole black peppercorns.

Emphasis on the COULD.

My kiddos love these sour brine pickles, and I just don’t want to mess a good thing up. I’m afraid they would turn their noses up at garlic parsley pickles with peppercorns, and we wouldn’t want that.

If you wanted to make dill pickles, add about two heads of fresh dill per half gallon.

I added some parsley for the photo, but like I said, I just pulled that little sprig right back out and got on with my plain Jane pickle makin’.

After the salt water brine has cooled, add it to the jar of cucumbers, leaving at least 2 inches of headspace at the top.

Add a weight to keep the sliced cucumbers under the brine.

I keep a couple good sized rocks on hand for my fermenting weights. I just slip the rock in a Ziplock bag so it doesn’t make contact with my ferment.

Since the original posting of this recipe, I’ve switched to using glass fermentation weights.

Screw on the Lid

After the cucumbers are weighted down in the salty brine, cover the jar with a fermentation lid and place jar ring on loosely. Fermenting does create some natural gases that need to be released, so if you are not using a fermentation lid, don’t screw the lid on too tightly. However, do keep it covered so flies and varmints don’t decide to feast on your pickles.

You can also use these Pickle It fermenting lids, but you definitely don’t have to. The purpose of the lids is to allow gases to escape, while letting nothing else in. I use them all the time, but they were already in use in other ferments when I was making this tutorial. You can pretty much accomplish the same thing with a loose lid.

Allow to ferment until desired taste is reached.

How long does it take to ferment pickles?

It usually takes 5-7 days for the fermentation process. After five (or so) days, they will usually taste perfectly pickle-ish.

What is the salt-to-water ratio needed for fermentation?

The salt-to-water ratio is commonly between 2-5%. Somewhat depends on taste. Most recipes will call for about 2 tablespoons of salt per quart of water.

Can fermented pickles make you sick?

There is a low risk of pickles making you sick. Always make sure your tools and jars are very clean. Always check for signs of mold and toss if there is mold.

How do you keep homemade pickles crunchy?

If you want your pickles to stay really crunchy you can add a grape leaf to them. This is totally optional, but the tannins in the grape leaf help keep that crunch.

What is brine pickling?

Brine pickling is the process of preserving with salt water.

What is pickle brine made of?

Water and salt. It is that simple. You can also add other herbs and spices if desired.

Is brine the same as vinegar?

No, they are different. Brine refers to a salt-water mixture, while vinegar is an acidic liquid made from the fermentation of alcohol.

Are all pickles lacto-fermented?

No. Most store bought pickles are not lacto-fermented unless stated on the label. Due to the canning process, all the good bacteria produced during the fermenting process would be killed.

Is lacto-fermentation the same as pickling?

No, lacto-fermentation has the presence of good bacteria that ferments and helps preserve the vegetables. Whereas, pickling is the process of soaking vegetables in a mixture of vinegar, salt, and water which gives it a sour taste.

They have a salty, tangy, and slightly acidic flavor.

What vegetables can you lacto-ferment?

There are lots of vegetables you can lacto-ferment like: beets, cabbage, carrots, cauliflower, cucumbers, garlic, green beans, kohlrabi, peppers, radishes, snap beans, tomatoes (we love making fermented salsa), turnips, and zucchini. I created a whole guide on how to lacto-ferment vegetables here.

I included this photo to show you the color difference after fermentation. The garden fresh cucumber is on the right and the pickle, after a five day fermentation, on the left.

We Love these Homemade Probiotic Pickles!

We love these sour pickles, and you can bet I will be making many, many more this summer, as we are up to our ears in garden cucumbers.

For my next batch, I am going to just throw the freshly sliced cucumbers in the brine from a previous batch. Since it is already teeming with the beneficial bacteria, it will serve as a jump start for the process in the next batch.

Fermented vegetables, like these fermented pickles, can last six months or more in the refrigerator, IF you can go that long without eating them all up.

If you try this recipe and love it, I would love if you could come back and give it 5 stars! Tag me on Instagram @farmhouseonboone

It is normal for the brine to get cloudy. This is a natural byproduct of vegetable fermentation and does not mean mold.

Take one out and try it. If it is sour enough for you, put the lid on tightly, and throw the jar in the fridge. If you would like them to get a little more sour, leave them out at room temperature to ferment a little longer.

After you make your first batch, you can use some of the brine to make your next batch. It already contains a plethora of good bacteria, so you’ll be giving your next batch pf probiotic pickles a head start.

Side note: I included this last shot as a little update on the 18 week baby bump. 😉