This sourdough French toast recipe is totally made from scratch. Homemade sourdough bread is soaked in a custardy egg mixture and cooked to perfection. You can use any bread you like, but I will show you how to make it with my favorite homemade bread. I’ve been a fan of French toast for a really […] 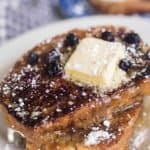 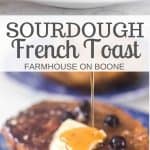 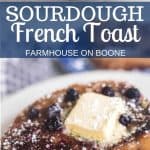 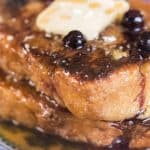 This sourdough French toast recipe is totally made from scratch. Homemade sourdough bread is soaked in a custardy egg mixture and cooked to perfection. You can use any bread you like, but I will show you how to make it with my favorite homemade bread.

I’ve been a fan of French toast for a really long time now, and I love to make it for my family. My father-in-law says that my cinnamon raisin bread French toast (which basically uses the same egg mixture, but with my raisin bread recipe) is the best he has ever had.

Now, that one is not made with sourdough; that is just a regular yeast raisin bread. So today, I’m going to show you how to do that with my homemade sourdough bread.

This recipe does take a little bit of forethought, but I promise you, it is totally worth it.

There is something about creating this recipe from scratch – from mixing and kneading, to soaking it in the mixture of eggs that were collected from our chickens and milk straight from our dairy cow, to frying it in raw butter – that makes it extra special.

You get to have a part in every step of the process, which is truly a lost art in our society today.

One day, I hope we get to have an even more hands-on approach to our food by getting our own dairy cow, but that hasn’t happened quite yet.

Tools you may need:

Mixer – Recently, I got this professional KitchenAid mixer and love it.

Is Sourdough good for toast?

This will depend on the type of sourdough bread you use. If you use my recipe for sandwich bread, then it will work well. But sourdough made in a Dutch oven is not as ideal, as the crust can be much too hard for making a good slice of French toast. It totally can be done; it’s just a little more difficult.

How do you make French toast not soggy?

It all depends on how you cook it. Start it off on a higher heat to sear the outside, creating a golden-brown crust, then as soon as you flip it to the other side, turn the heat down to medium-low so the French toast cooks slower and all the way through.

Why is sourdough a healthier choice?

Sourdough is the process of fermenting grains and allowing the natural yeasts to raise the bread.

During this fermentation, phytic acid – that is naturally occurring in the grains – is broken down, making some nutrients, like folate, increase while making other nutrients more bioavailable.

Fermenting grains can also increase the digestibility, and may even lower amounts of gluten. (source)

Some people that have gluten sensitivities may be able to tolerate long-fermented (24 hours) wheat products. I have a friend whose daughter cannot tolerate any gluten-containing foods, except for long-fermented sourdough products.

How to store sourdough french toast:

Place in an air-tight container and place in the fridge up to 3-4 days. Reheat in the oven, toaster, or on a cast iron skillet. It also freezes really well. Individually wrap in plastic wrap or parchment paper, place in an air-tight container and freeze for up to 3 months. To reheat, place in the oven or just pop into the toaster. The perfect easy, healthy, make-ahead breakfast.

Sourdough bread: I prefer to make it from scratch, but if you don’t have a sourdough starter or just simply don’t have the time, you can pick up a quality loaf of sourdough sandwich bread.

Eggs: Try to choose pasture-raised whenever possible. They are more nutritious and delicious.

Milk: Whole is preferred, but use what you have. Find out why we drink raw milk here.

Honey or maple syrup: Either will work, both lend themselves to slightly different flavors.

Vanilla extract: Adds a delightful vanilla flavor to the custard.

Salt: Salt is such an under appreciated addition to sweetened recipes. It really helps bring out all the flavors of a dish and shouldn’t be skipped.

Cinnamon – Nothing like the warm cinnamon flavor. During the fall you could also substitute it with pumpkin spice.

How To Make Sourdough French Toast:

If you try this recipe and love it, I would love if you gave it 5 stars! Thank you!

If you are wanting to make this completely from scratch, bread and all, you will want to make sure you plan ahead. Know that you will need to feed your starter a few hours before starting the bread, and then allow it to ferment for 8-12 hours and up to 24 hours.

I like to fry my French toast in butter, but coconut oil would also work.

Slice your bread nice and thick, so it can really absorb the egg mixture.